This post outlines how to use the teamlucc package to remove thick clouds from Landsat imagery using the Neighborhood Similar Pixel Interpolator (NSPI) algorithm by Zhu et al.1. teamlucc includes the original (modified slightly to be called from R) IDL code by Xiaolin Zhu, as well as a native R/C++ implementation of the NSPI algorithm. Thanks to Xiaolin for permission to redistribute his code along with the teamlucc package.

First load the teamlucc package, and the SDMTools package we will use later:

If teamlucc is not installed, install it using devtools”

First I will cover how to cloud fill a single clouded image using a single clear (or partially clouded) image. Skip to the end to see how to automate the cloud fill process using teamlucc.

This example will use a portion of a 1986 Landsat 5 scene from Volcan Barva, Costa Rica (a TEAM Network monitoring site). The scene is WRS-2 path 15, row 53. Particularly in the tropics, it can sometimes be difficult to find a Landsat image that is cloud-free. Cloud filling can offer a solution to this problem if there are multiple Landsat scenes captured of an area of interest, that, taken together, offer a cloud-free (or nearly cloud-free) view of an area. Throughout this post I will refer to the “base” and the “fill” images. The “base” image is a cloudy image that will be filled using images (the “fill images) of the same area that were captured on different dates.

While it can sometimes be possible to find a cloud-free scene from a different part of the year that can be used to fill in a cloudy scene from an earlier or later base date, it is often the case that both the fill and base image will have clouds. Therefore we must use cloud masks to mark areas in both the base and the fill image. Without a cloud mask for the fill image we could otherwise inadvertently fill clouded areas in one image with also cloudy pixels from another image.

The base (cloudy) image for this example is from January 5, 1986, and the fill image is from January 21, 1986. The images are surface reflectance images from the Landsat Surface Reflectance Climate Data Record (CDR), that also include cloud masks constructed with the Function of Mask (fmask) algorithm2. Both of these images have significant cloud cover, and some areas are cloudy in both images. This example will show the ability of the cloud fill algorithms to function even in difficult circumstances.

To follow along with this analysis, download these files.
Note that the original CDR reflectance images have been rescaled to range between 0 and 255 in the files supplied here (this rescaling is not required prior to performing cloud fill - I just did it here to make the files sizes smaller so they could be more easily hosted on this site).

First load the base and fill images into R:

Notice the cloud cover in the base image: 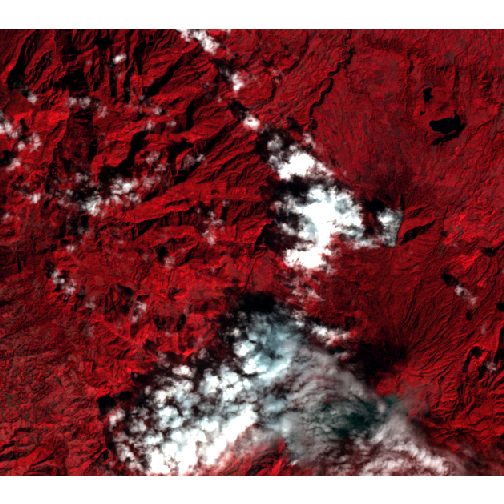 The fill image also has cloud cover, but less than the fill image - there are areas of the fill that can be used to fill clouded pixels in the base image: 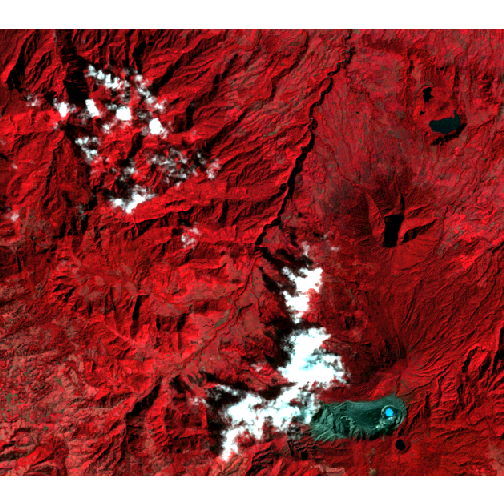 To perform topographic correction, use the topographic_corr function in teamlucc. First load the slope and aspect rasters:

Now call the topographic_corr function twice, to topographically correct both the base and fill image. Note that the sun angle elevation and sun azimuth (both in degrees) must be supplied - values for these parameters can be found in the metadata accompanying your imagery. See ?topographic_corr for more information. DN_min and DN_max can be used to ensure that invalid values are not generated by the topographic correction routine (which can sometimes be a problem in very heavily shadowed areas, or in very bright areas, such as clouds). 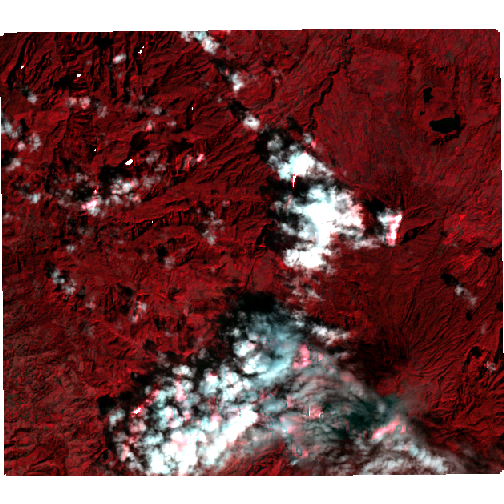 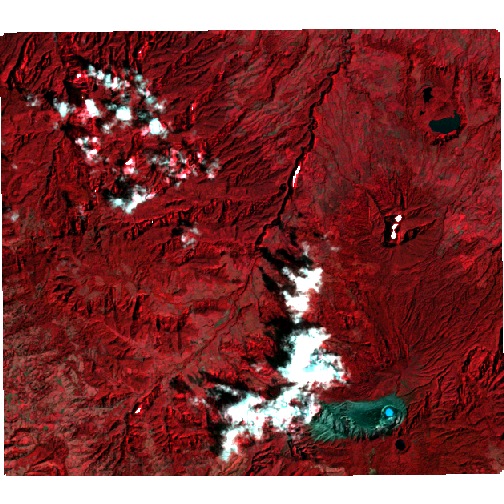 The fmask band from the CDR imagery uses the following codes:

We need to construct a mask of areas where all pixels that are cloud (code 4) or cloud shadow (code 2) are equal to 1, and where pixels in all other areas are equal to zero. This is easy using raster algebra from the R raster package. First load the masks:

Now do the raster algebra, masking out clouds and cloud shadows, and setting missing values in both images to NAs in the masks:

Plot these masks to double-check they align with the clouds in the images we viewed earlier: 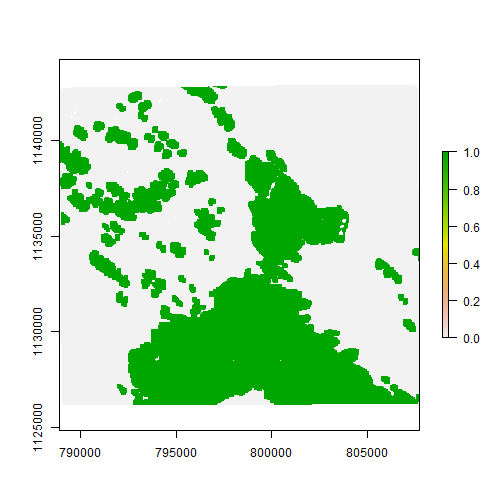 Now use these two masks to mask out the clouds in the fill and base images, by setting clouded areas to zero (as the cloud_remove code treats pixels with zero values as “background”:

The cloud mask for the base image must be constructed so that each cloud has its own unique integer code, with codes starting from 1. This process can be automated using the ConnCompLabel function from the SDMTools package.
However, because there are clouds in our fill image as well as in our base image, we need to modify the base_cloud_mask slightly to account for this. First, code all pixels in base_cloud_mask that are clouded in fill_cloud_mask with NAs. This will tell the ConnCompLabel function not to label these pixels as clouds (because they are also clouded in the fill image, we cannot perform cloud fill on these pixels).

The final base_cloud_mask is now coded as:

where n is the number of clouds in the image: 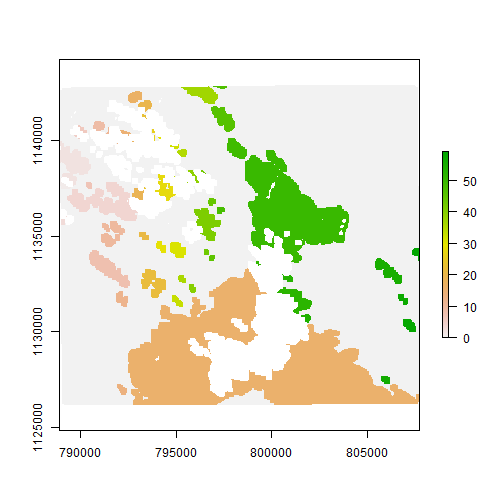 For this simple example, we will directly use the cloud_remove function in teamlucc. This function has a number of input parameters that can be supplied (see ?cloud_remove). Two important ones to note are DN_min and DN_max.
These are the minimum and maximum valid values, respectively, that a pixel in the image can take on. These limits are used to ignore unrealistic predictions that may arise in the cloud fill routine. For the base and fill images we are working with here, these values are 0 and 255, for max and min, respectively.
Set these parameters to appropriate values as necessary for the images you are working with.

If run with algorithm="CLOUD_REMOVE" (the default), cloud_remove runs an IDL script provided by Xiaolin Zhu. For R to be able to run this script it must know the path to IDL on your machine. For Windows users, this means the path to “idl.exe”. To specify this path you will need to provide the idl parameter to the cloud_remove script. The default value (C:/Program Files/Exelis/IDL83/bin/bin.x86_64/idl.exe) may or may not work on your machine. I recommend you set the IDL path at the beginning of your scripts:

An optional out_name parameter can be supplied to cloud_remove to specify the filename for the output file. If not supplied, R will save the filled image as an R object pointing to a temporary file.

To run the cloud removal routine, call the cloud_remove function with the appropriate parameters. Note that this computation may take some time (it takes around 1.5 hours on a 2.9Ghz Core-i7 3520M laptop).

Use plotRGB to check the output. Note that IDL does not properly code missing values in the output - prior to plotting or working with the data be sure to set any pixels with values less than DN_min (here DN_min is zero) to NA: 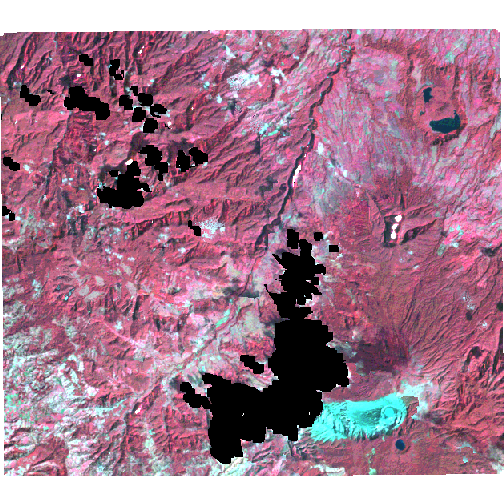 The default cloud fill approach can take a considerable amount of time to run.
There is an alternative approach that can take considerably less time to run, with similar results. This option can be enabled by supplying the algorithm="CLOUD_REMOVE_FAST parameter to cloud_remove.

The “fast” version of the algorithm makes some simplifications to improve running time. Specifically, rather than follow the precise algorithm as outlined by Zhu et al.1, the “fast” routine uses k-means clustering to divide the image into the number of classes specified by the num_class parameter. The script then constructs a linear model of the temporal change in reflectance for each class within the neighborhood of a given cloud. This “temporal” adjustment is complemented by a “spatial” adjustment that considers the change in reflectance in a small neighborhood around each clouded pixel. For each clouded pixel, a weighted combination of the predicted fill values from the spatial and temporal models determines the final predicted value for that pixel. This version of the algorithm takes only 2.5 minutes to run on the same machine as used above:

Use plotRGB to check the output: 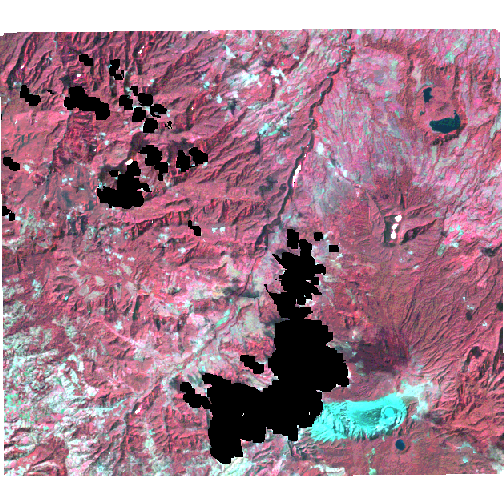 If you do not have IDL on your machine, there is a C++ implementation of the NSPI cloud fill algorithm that will run directly in R, as well as a “simple” cloud fill algorithm that uses linear models developed using the neighborhood of each cloud to perform a naive fill. To run the R version of the NSPI algorithm, call the cloud_remove function with the same parameters as above, but specify algorithm="teamlucc". This function also has a verbose=TRUE option to tell cloud_remove to print progress statements as it is running (this option is not available with the IDL scripts shown above). This version is nearly identical to the IDL algorithm called with the algorithm="CLOUD_REMOVE" option, but it takes much less time to run (only 3-4 minutes on my machine).

Note that when cloud_remove is run with algorithm="teamlucc" and verbose=TRUE, there will be a large number of status messages printed to the screen. For the purposes of this demo (so that the webpage is not unnecessarily long), I have not used the verbose=TRUE argument, but I recommend using it if you try this command yourself.

View the results with plotRGB: 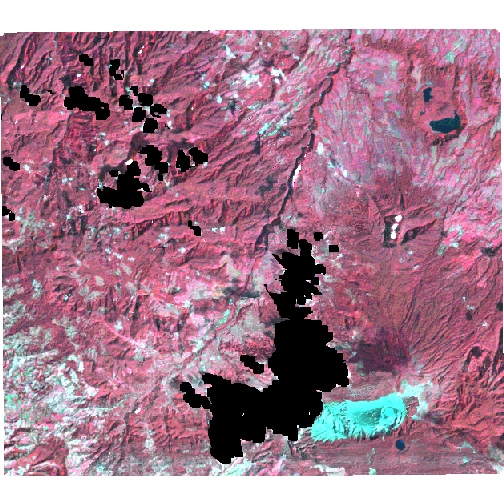 The fastest cloud fill option is to run cloud_remove with algorithm="SIMPLE". This uses a simple cloud fill approach in which the value of each clouded pixel is calculated using a linear model. The script develops a separate linear model (with slope and intercept) for each band and each cloud. For each cloud, and each image band, the script finds all pixels clear in both the cloudy and fill images, and calculates a regression model in which pixel values in the fill image are the independent variable, and pixel values in the clouded image are the dependent variable. The script then uses this model to predict pixel values for each band in each cloud in the clouded image. For example:

View the results with plotRGB: 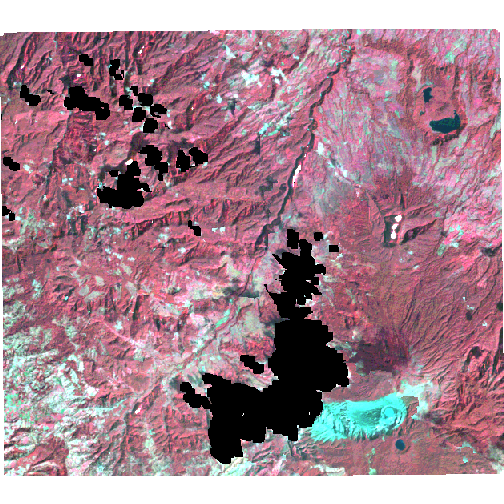 To plot the results of all four fill algorithms, make a layer stack of the first band of all four images, then plot: 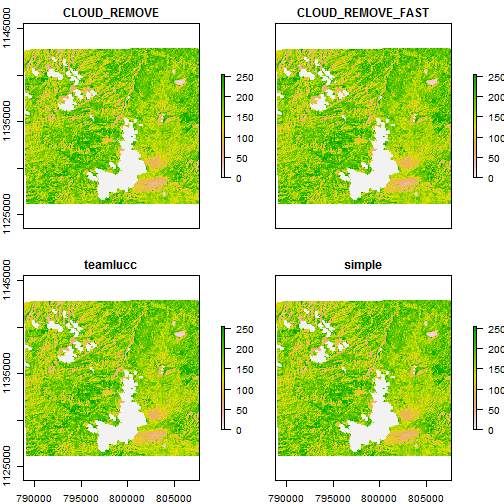 The teamlucc package also includes functions for automated cloud filling from an image time series. Automatic cloud filling is performed using the auto_cloud_fill function. This function automates the majority of the cloud filling process. As multiple images are required to demonstrate this process, the images required for this portion of the example are not available for download from this site. I suggest you download the appropriate imagery for a particular study site and preprocess the imagery using the auto_setup_dem and auto_preprocess_landsat functions in the teamlucc package so that you can follow along with this example. The auto_preprocess_landsat function will also perform topographic correction, which is necessary prior to cloud filling images in mountainous areas.

As the auto_cloud_fill function automatically chooses images for inclusion in the cloud fill process, it relies on having images stored on disk in a particular way, and currently only supports cloud fill for Landsat CDR surface reflectance images. To ensure that images are correctly stored on your hard disk, use the auto_preprocess_landsat function to extract the original Landsat CDR hdf files from the USGS archive. The auto_preprocess_landsat function will ensure that images are extracted and renamed properly so that they can be used with the auto_cloud_fill script.